Abortion due to EAE is the most common type of abortion in the UK; hence, it poses the biggest economic loss for sheep farms in terms of pre-natal disease. The pathogen that causes the disease can also infect humans, meaning that the disease is classed as zoonotic. A zoonotic disease is one which can be transferred or transmitted between species. Due to these two main factors, EAE is of great concern to modern sheep farming and may pose further risks in the future if flock health programmes do not continue to battle against the disease.

A pathogen is a disease causing organism, often these organisms are microscopic; in terms of EAE this is the case. The pathogen which causes EAE is a specific species of the Chlamydia genus, known as Chlamydophila abortus.
C. abortus is a bacterium. Often the bacteria are ingested by ewes when abortion material, such as foetus, afterbirth or membranes, contaminates bedding, feed troughs or water sources. When these contaminated materials come into contact with non-infected ewes, the bacteria are introduced into their body and then can start to cause clinical disease in that ewe. 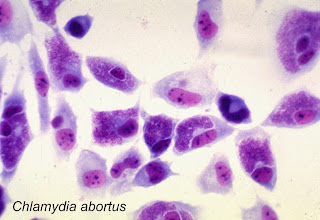 The first sign of infection are usually only visible after the ewe has given birth to the foetus(es).  The most common and characteristic sign of this infection is the appearance of dead or weak lambs, in addition there is usually visibly diseased afterbirth and a discharge of infected fluid which can last for several days (meaning also that the ewe can remain an active source of infection for a while after birth).
As well as lambs being born weak/dead it is also common for the lambs to be born too early; often this is seen during the last few weeks of pregnancy. The aborted lamb may look normal or may show a degree of subcutaneous oedema (subcutaneous meaning under the skin and oedema is bodily fluid often associated with disease).
The placental membranes appear thickened and reddish-yellow, and a dirty pink infectious vaginal exudate (fluid) may be noted for a further 7-10 days.
In sheep the infection most probably first infects the tonsils, where it will be disseminated (diffuse and join) the blood or lymph, travelling to other organs eventually; in particular, the womb and placenta. The main points are: 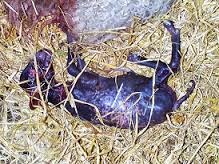 When ewes are infected less than 6 weeks away from parturition (giving birth) the infection does not result in abortion of lambs and although it is common for the lambs to die due to being weak, some lambs survive. These lambs will carry the infection and remain an important source of the disease. The ewe that birthed the lamb will also carry the infection and most probably abort in the next lambing season. Therefore when a ewe is infected, the organism becomes ‘silent’ (latent), remaining dormant in the ewe until the following lambing season, when it will become active and cause severe adverse effects.
This idea of the C. abortus becoming latent in the host ewe is a concern as it means that when buying in new animals, great care needs to be taken when sourcing replacement stock. Once in a flock the disease is difficult to eradicate. While initially only one or two animals may lose their lambs during initial season, the ease of transmission and difficult of diagnosis may eventually lead to an outbreak of up to 30% losses in one season. These losses can be reduced by the use of antibiotics in the midst of lambing time, however the damage already done to the tissues involved in the infection are irreversible and vaccination still remains the best option.

As always, prevention of the disease is much more beneficial than treatment. Preventing the disease in the flock and prevent the spread through the flock should be treated as different matters.

Vaccines can be used to prevent the disease affecting the flock. The only vaccines currently available in the UK are based upon live weak strains of the C. abortus organism. Vaccination has reduced the incidence of the disease but even with the vaccine some animals may still lose their lambs. A problem with the vaccine given is that it is given before lambing and suppliers have in the past been restricted in this time of year due to manufacture; furthermore, the vaccine poses a risk to humans who are pregnant or suffering from immunodepressancy (poor immune system).

The vaccines available are Enzovac® and CEVAC Chlamydia®.

Enzovac® vaccination uses a live vaccine in order to help prevent infection in uninfected (“clean”) ewes and also reduce the spread of the disease between members of the flock.
A 2ml dose of vaccine is required at least 4 weeks before mating to ensure full effects of the drug are achieved in the flock. 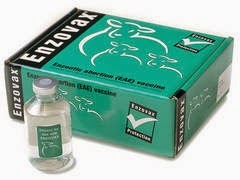 CEVAC Chlamydia® vaccination also uses a live vaccine. CEVA recommend a vaccination strategy of vaccinating all ewes and ewe-lambs in the first year of vaccination. This dose of vaccine will give them life-long immunity however it may be necessary to repeat a vaccine dose after 3-4 years of lambing seasons. Vaccine should be given 1-2 months before mating for ewes and from 5 months old onwards for ewe-lambs. 2ml dose of subcutaneous or intramuscular injection. 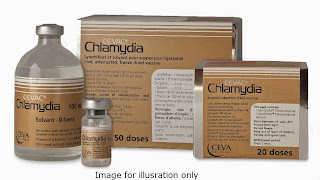 It is important to realise that vaccinating already affected ewes has no effect. The vaccine only prevents the disease from taking hold in the ewe. All new stock and new ewe-lambs should be vaccinated before being introduced to the main flock.

Preventing the spread of the disease is involved highly with biocontainment. As abortion material is the main source of infection all abortion material and the ewe itself should be isolated as soon as possible. Lambs should never be adopted onto other ewes if the dam dies. Lambs that do survive should not be used for breeding in following years, however can still sent to slaughter for meat.

The main ways to prevent spread of infection are:
·         If you suspect a ewe will abort, isolate her immediately.
·         When a ewe does abort/give birth normally, isolate the ewe and lamb as quickly as possible.
·         Remove all abortion/birth material from the place of birth and put into a bio-waste bag ready for proper disposal. Abortion material includes any membranes passed before the lamb has passed the afterbirth and any blood material left staining the bedding.
·         If possible, put down hydrated lime on the area where the ewe aborted/lambed in order to disinfect the area.
· 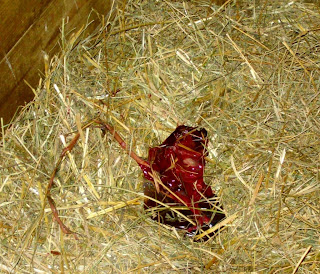 Treatment of affected ewes is dissimilar to other diseases. The problem with treating this kind of abortion is that, once the abortion is recognised and probable causal pathogenic agent is identified, the damage to the lamb, womb and placenta has already been done. Treatment after recognition, in order to improve lambing for the next season is an option.

Recuperating losses can be difficult as the lambs born, the ewe and the flock are all potential sources of loss. However, using anti-biotic treatments in cases where vaccination has not been achieved may be useful in some husbandry systems.
In the face of an outbreak when it may be beneficial to administer a long –acting antibiotic injection such as Oxytetracycline. This will not stop the infection however it may mean that some ewes will be safeguarded against early abortion and so will lamb closer to their natural term. Although their lambs may die, it puts them in a better position to allow other lambs to be adopted onto them; as they are closer to their natural full term the ewe will have more milk and more readily accept an orphan lamb. Only ram lambs that are being culled for meat should be adopted onto aborted ewes.
This kind of treatment will not ensure protection for further seasons; will not increase the birth weight or condition of the lamb; will not reduce the amount of vaginal excretion after lambing and will not reduce the spread of the disease. The main purpose of this treatment is to increase the chance of a live birth. 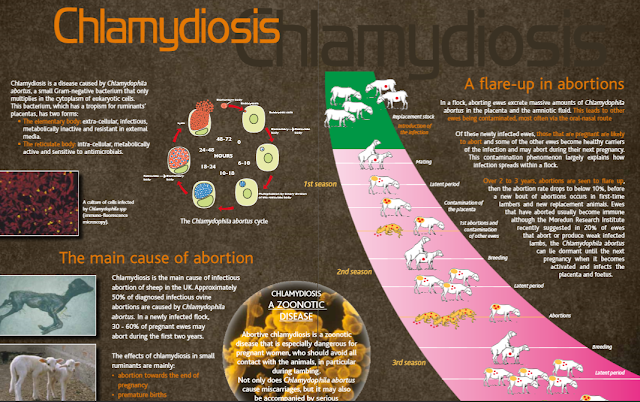 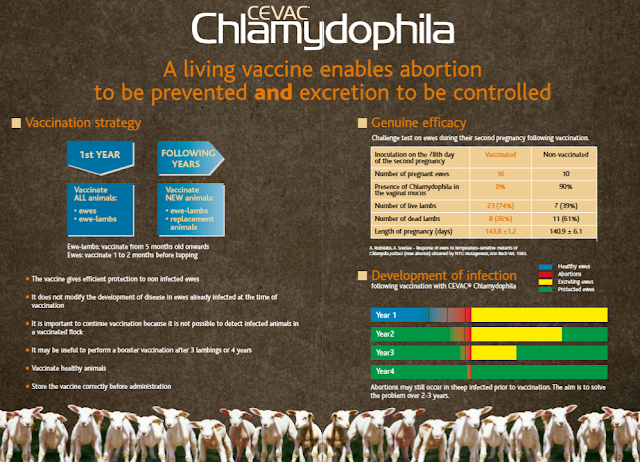