Blog is constantly being updated to cover all topics... please be patient
Home » cattle » pain. NSAID » sheep » Pain Management in Sheep and Cattle

Pain Management in Sheep and Cattle

Definition of “pain”:
an unpleasant, sensory experience representing awareness by the animal of damage or threat to its tissues that elicits protective actions and results in learned avoidance. Pain is a complex experience, dependant not only on the severity of the stimulus and the degree of tissue or nerve damage, but also on previous pain experiences.
Pain may be acute, chronic, localised, generalised, physical, emotional, adaptive and maladaptive. An individual can experience several types of pain at the same time.

Pain associated with the locomotor system results in lameness…

When there is pain in the anatomical system that controls movement, lameness often results. Many of the other clinical signs may also be present in the animal such as failing to graze with the others in the group, reducing feeding times, increased lying, reduced grooming and increased respiratory rate when attempting to walk.

The owner of the animal should not only care about pain management due to welfare reasons, but also as pain can reduce animal performance/production; whether its milk yield or growth rate, a decrease in either will reduce farm income. With this in mind any disease or injuries which may cause pain, should be prevented wherever possible.

Farm animals are recognised as sentient beings (experiencing sensations or feelings) within the EU Treaty of Amsterdam 1999. In addition, the Animal Welfare Act 2006 includes a duty of care to provide for the needs of protected animals for which humans have permanent or temporary responsibility. The stockperson is responsible for the care of the herd/flock and is primarily responsible for the appropriate treatment of diseased animals.
So what does all this mean? Well, drawn from these regulations the Farm Animal Welfare Council (FAWC) implement “Five Freedoms” which are essential for all husbandry systems. They are general guidelines to the basic care of farm animals:
1.      Freedom from hunger and thirst: by ready access to fresh water and a diet to maintain full health and vigour.
2.      Freedom from discomfort: by providing appropriate environment including shelter and a comfortable resting area.
3.      Freedom from pain, injury or disease: by prevention or rapid diagnosis and treatment.
4.      Freedom to express normal behaviour: by providing sufficient space, proper facilities and company of the             animal’s own kind.
5.      Freedom from fear and distress: by ensuring conditions and treatment that avoid mental suffering.
Generally speaking, the 3rd Freedom is of the most importance and the most challenging to meet for veterinary surgeons and stock keepers.

Inflammation induces alterations in pain information processing, which may have serious long-term consequences for the animal’s well-being.

Hyperalgesia – exaggerated responses to noxious stimuli are common features of inflammatory pain. A “hyperalgesic” state results in a response to an unpleasant stimulus at a level which would not affect “normal” individuals.  A good example is that the animal kicks vigorously when the affected foot is gently palpated/trimmed. “Hyperalgesia (Increased pain from a stimulus that usually provokes pain)”

Two key areas are responsible as the source of pain in farm animals; disease, both infectious and non-infectious, and the environment in which we house our livestock.
Pain associated with inflammatory diseases is probably the major source of pain in ruminant species. Inflammatory conditions that induce hyperalgesia probably induce spontaneous pain in the first instance and contribute to adverse welfare over a longer duration. While the magnitude of hyperalgesia does not appear to be related to the stimulus intensity, duration of hyperalgesia does appear to be correlate significantly to the intensity of the inflammatory stimulus; meaning that, the more severe or ‘damaging’ the stimulus causing the inflammation, the longer the hyperalgesia will be in effect in that animal.

Anaesthesia can be used in different ways. It can be used locally to cause a local nerve block, regionally to desensitise a specific area or generally to render the animal unconscious whilst a procedure is carried out.

Local Anaesthesia Uses
In the UK, local anaesthesia is a legal requirement before disbudding calves more than one-week old. Chemical cautery (caustic paste) can only be used in calves less than one week old.

Three methods used to castrate calves in the UK are:
1) a rubber ring or other device to restrict flow of blood to scrotum
2) bloodless castration by crushing the spermatic cords with the Burdizzo
3) surgical castration

Rubber ring castration is only permitted within the first week of life. Local anaesthesia is a legal requirement before castration of calves more than 2-months old. Injection of a NSAID before castration and disbudding has been to shown to reduce acute pain associated with these mutilations.
For more information on castrating and disbudding please visit my Cattle Page Index or follow this link… “coming soon”

Non-steroidal anti-inflammatory drugs (NSAIDs, analgesics)
These drugs are widely used in small animal veterinary practice to provide symptomatic relief in the treatment of both acute and chronic musculoskeletal inflammatory conditions and pre-operatively for surgical procedures. They are used for similar reasons in farm animal therapy, with a few more alternate uses…

Cattle: in farm practice in the UK, NSAIDs are used to treat a wide range of infectious conditions including coliform (environmental) mastitis, respiratory disease, lameness and joint infections in young calves.
The NSAID Flunixin was shown to temporarily counteract hyperalgesia in dairy cows with acute mastitis while Ketoprofen has been shown to have long lasting effects on hyperalgesia in lame cattle. Veterinary surgeons routinely use NSAIDs before surgical procedures such as caesarean operation or left displaced abomasum surgery. Many veterinary surgeons will administer NSAIDs after calving a cow. NSAIDs are particularly effective in reducing acute pain associated with castration and disbudding/dehorning but are not often administered because of cost and lack of perceived need for pain relief.

Sheep: the fact that NSAIDs are only rarely used to treat sheep may result from a lack of perceived requirement for anti-inflammatory or analgesic therapy, cost, and a lack of products licensed for use in sheep. With respect to NSAID use in sheep, in the EU, it is possible to use products registered for other food-producing species (e.g. cattle) through “The Cascade System”.

NSAIDs are particularly effective in reducing acute pain associated with castration and tail docking but are not often administered because of cost, time required to inject every lamb, and a lack of perceived need for pain relief.
Appropriate antibiotic therapy is essential to treat disease and remove the source of inflammation and pain. Prompt treatment of disease returns the animal to normal more quickly with increased production and profitability. Treatment of pain is described as a win-win situation with advantages for the animal and the farmer in terms of reduced loss of production/performance.

Often a multimodal therapy is used to reduce pain. For example in a ewe with prolapse, an extradural injection to prevent straining of the ewe, intravenous injection of NSAID to reduce inflammation and an appropriate antibiotic to reduce bacterial challenge to the prolapse can be used.

Since many caused of pain in animals can arrive from disease which is preventable by vaccination, vaccination should be a major component of the farm’s herd and flock health programmes and is a cost-effective means of preventing disease such as pneumonia and the pain associated with that disease.
Causes of pain may also be attributed to the housing units in which stock are kept; a particular example of this is the housing of dairy cattle. Many injuries are a result of inadequately comfortable cubicles, narrows passages with tight turns and slippery floors.

Euthanasia
The culling of animals for welfare reasons is the best option in certain neglected cases which have a guarded prognosis. If the pain of the animal outweighs the probable prognosis then euthanasia should be considered the best treatment. 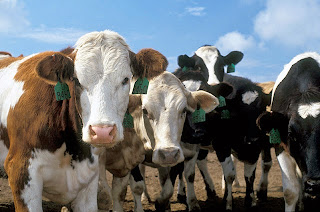