Blog is constantly being updated to cover all topics... please be patient
Home » »Unlabelled » Bluetongue in the sheep and cattle UK

Bluetongue in the sheep and cattle UK

Bluetongue in the UK

Sheep are the species at the most risk of clinical disease when it comes to BTV. Cattle act as reservoirs for the disease because they are sub-clinically infected and rarely show any clinical signs. Humans are not affected by BTV. The last outbreak of BTV in UK was 2007. It is more of a problem in warmer climates such as Africa and Eastern Europe.

This disease is caused by the bluetongue virus. This virus is transferred by insect hosts. The specific host that this virus is transmitted by is the Culicoides midge, of which there are several sub-species. As midges are more active in hotter climates, this is the reason for the increased prevalence in Africa and India.
As the disease is caused by a virus and not a bacterium, antibiotics are ineffective in treating the disease. Viruses work by invading the cells of the body using antigens (small molecular shapes) on the outside of their surface, which attach to cells and allow the virus inside the cell. Once inside the cell the virus inserts its own DNA into the cell nucleus (the replication centre of the cell) and as a result, many more copies of the virus are produced which eventually burst the cell open and the same process continues on a much larger scale. Viruses are hard to combat as they often mutate as they are being produced inside a cell, meaning that some viruses will contain very small but sometimes necessary differences that can overcome treatment methods. 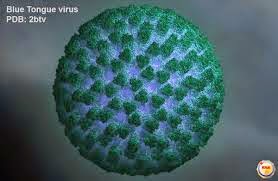 There are various serotypes (a serotype is a sub group among bacteria or viruses which all share similar differences in their outer surface membrane, meaning they behave slightly differently as pathogens) of the BTV virus. They have also been known to be present in different areas of the world. In the UK, BTV has not posed an imminent risk to any livestock in over 8 years. However, different serotypes may prove to be more virulent (contagious or damaging) and affect the UK animal industry in a much more serious way.

When an infected animal is bitten by a Culicoides midge, the midge ingests the virus (and/or the virus gametes, which are sex cells) and following a second bite to a different animal, the virus is injected into the second animal’s blood stream.  The virus cannot be transmitted via contact of mucus or close contact. Additionally the virus does not infect humans. 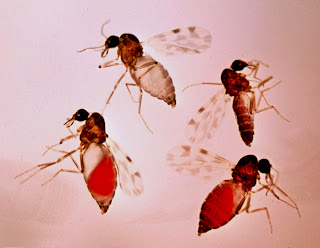 In sheep the main signs to look for are ulcer in the mouth, discharge of mucus and drooling from the mouth and nose as well as swelling of the mouth, head and neck and coronary band.
Other less associated signs are red skin as a result of blood collecting beneath the surface, fever, lameness and breathing problems.
·         Ulceration of the mouth
·         Nasal mucus
·         Oral mucus and excess salivation
·         Lacrimation (tear production)
·         Swelling around the nose, mouth and head region
·         Coronary band swelling leading to lameness
·         High body temperature
·         Inflammation of the skin 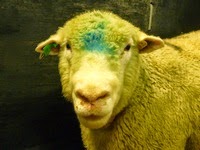 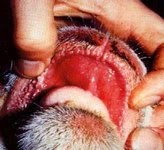 A good way of summarising the disease is… “Sheep demonstrate a hypersensitivity reaction. This includes fever, stiffness or lameness and an increase in respiratory rate with increased salivation. Severe congestion of the nasal passage can also occur. The mouth is sore and the surrounding areas can be swollen giving a ‘monkey face’ appearance. Sheep will eat less and champ or hold food in their mouth to soften it. Occasionally, sheep will develop a swollen tongue with a bluish tinge caused by a lack of oxygen in the blood.”

The term bluetongue is associated with severe rare cases where the mouth and nose swell so much that the tongue becomes almost blue in colour due to a reduced blood flow and severe swelling.
In cattle the disease is less severe. However the fact that cattle can carry the disease is an important source of infection. The mixed grazing of cattle and sheep is best avoided when possible.

The symptoms in cattle are… nasal discharge, swelling of the head and neck, conjunctivitis, swelling inside and ulceration of the mouth, swollen teats, tiredness and salivation.

Once Bluetongue is introduced to the body, the virus replicates in local lymph nodes which then seed other lymph nodes with the virus along with the spleen, lungs and vascular system. It is vascular damage that is the most pronounced causing swellings, haemorrhage and necrosis of tissues.

There is no treatment for the disease. Some animals will recover naturally. In South Africa where it is a major problem there are vaccines available however they are not 100% effective.
Prolonged recovery can often lead to decreased production, abortion and birth defects.


As always, maintain a clean and hygienic environment can help; reducing the amount of midges drawn to the area will reduce the risk of disease and reduce the risk or spread.
Author: Luke Rose at 11:08
Email ThisBlogThis!Share to TwitterShare to Facebook