Blog is constantly being updated to cover all topics... please be patient
Home » »Unlabelled » First 24 Hours of Lamb Survival

Lamb Survival During the First 24 Hours
In the UK average stats tell us that for every 100 ewes put to a ram, 155 lambs are weaned. However, the average scanning percentage for these flocks is often 200%. This means that per 200 lambs, 45 will not make it to the stage of weaning. This is almost 25% loss of production or almost 6 million dead lambs per year. Although this can be attributed to a number of stages in the lamb’s life, the first 24-72 hours are the most important in terms of growth and survival.
In flocks vaccinated against toxoplasmosis and enzootic abortion, lambing indoors or outdoors during good weather, the losses should aimed to be around <7%. 5% is most achievable.
The main 3 factors infecting perinatal lamb mortality include: farm management (inc. nutrition), level of flock supervision, infectious diseases.
Flock nutritional management: this factor has implications on lamb birthweight, ewe body score and colostrum accumulation. These 3 criteria remain fundamental to ensuring a good start for a lamb during the critical first 36 hours of life.
The direct influence of dam energy under nutrition during late gestation has been shown to have a direct impact on reduced lamb birthweights and inadequate accumulation of colostrum. The more lambs being birthed by one ewe, the worse these effects are; singletons are often relatively unaffected by this matter.

Birth Injuries: lack of oxygen and trauma during birth process can be a contributing factor to lamb losses. Typical ways that this can occur is when the lamb is presented as a hung lamb (bilateral shoulder flexion). Such lambs may present with considerable swelling of the head when it is lodged within the maternal pelvis. Most common skeletal injury is fracture of a number of ribs along one side of the chest when a large lamb is delivered in posterior presentation. The lambs show an increased respiratory rate with painful chest movements. The chest wall is flat instead of convex.
Meconium Staining: of the fleece is an indication of a stressful birth and such lambs require special attention to ensure they suck quickly.
Colostrum Ingestion: colostrum in the lamb’s abomasum immediately caudal to the costal arch can readily be detected by gentle palpation. For every Kg of body weight, 200mls of colostrum should be consumed during the first 24 hours of life. 50mls/kg is required in the first few hours of birth. If the lamb has not nursed then methods should be undertaken to promote it to happen. Firstly, restrain the ewe and point the lamb towards the teat to see if the nursing will take place. If not then a bottle may be needed. If it is an emergency, a stomach tube should be used to give milk stripped from a dam, another ewe or bovine colostrum.
The importance of colostrum for the lamb is paramount. Immunoglobulins (antibodies) in colostrum provide the lamb with specific protection against clostridial disease and other diseases depending upon the dam vaccination status, as well as non-specific immunity. Colostrum is an essential source of energy, minerals and vitamins and also serves as a mild laxative. Many triplets do not receive sufficient colostrum during the first hours of life.

Less than: coma should not arise in lambs less than 6 hours-old unless the lambing flock has suffered adverse weather conditions. This situation occurs most commonly in the UK when ewes lamb outdoor during severe weather conditions. Hypothermic lambs less than 6 hours old do not require intraperitoneal glucose injection because the lamb is born with considerable reserves which can be mobilised to produce glucose; instead, the lamb is placed in a warming box at 45C. Colostrum should be stomach-tubed at a rate of 50mls/Kg once the lamb has been warmed sufficiently. Colostrum from cows can be used if pooled from at least 4 dairy cows vaccinated with sheep clostridial vaccine.

More than: any lambs that become hungry and are starved for 24-48 hours will quickly exhaust their glycogen stores and brown fat reserves, becoming hypoglycaemic and hypothermic. This metabolic crisis can be corrected by intraperitoneal injection of 25mls of 20% glucose solution followed by placing the lamb in a warming box at 45C. To administer the injection the lamb should be held vertically by the front legs. A 19gauge 25mm long needle is introduced through the body wall 2-3cm to the side of the navel and 2-3cm caudal. The needle is directed towards the tail head. This recovery will take roughly 30-60mins. 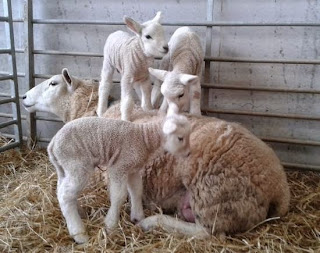 Author: Luke Rose at 11:43
Email ThisBlogThis!Share to TwitterShare to Facebook