Blog is constantly being updated to cover all topics... please be patient
Home » »Unlabelled » Ewe Prolapses

Vaginal Prolapse:
·         Occurs during the last month of pregnancy, typically affects around 1% of pregnant sheep but the prevalence varies from 0-15% in a flock.
·         Some factors have been implicated in the cause of vaginal prolapse, including: high body condition score, multigraved uterus (triplets or more),  high fibre diets, limited exercise and reasons for prolonged periods of sternal recumbency eg. Lameness.
·         Ewes with vaginal prolapse usually show a sign of stages 1 + 2 of labour such as straining, lateral recumbency with repeated agitation and forceful contractions even after the lamb has been expelled.
·         The longer the prolapse has been exposed, the more swollen the vaginal wall and more likely the risk of rupture during manual replacement.
·
Treatment: effective caudal analgesia administered by a vet greatly facilitates replacement of the vaginal prolapse. Emptying the bladder, which can relieve stress, can be achieved by raising the prolapse relative to the vulva, reducing the fold in the neck of the bladder at which point urine flows freely. The vaginal prolapse should be replaced with the ewe standing. The caudal analgesia is administered intravenously by the vet before replacing the vaginal prolapse to reduce pain. Antibiotics should be given daily for 3 – 5 days after; penicillin is cheap and effective, alternatively a long acting antibiotic such as Oxytetracycline can be administered. Vaginal prolapse often means the sheep must be culled before next season.

·         Methods of retention after replacement of vaginal prolapse:

Buhner Suture…
A suture of 5mm nylon tape is implanted by the vet. The vet will place the suture in the subcutaneous tissue around the vulva 2cm from the labia and tightened to allow and opening of 1.5cm (1 – 2 fingers). This kind of suture is easily untied for inspection and can be loosened to ensure lambing can take place. Other kinds of sutures, such as single interrupted or mattress sutures are unsuitable. They have practical problems and should be avoided as urine scalding of vaginal mucosa around the suture material in conjunction with secondary bacterial infection form large diphtheritic areas which cause considerable discomfort and resultant straining.

Plastic Retention Devices
These devices are shaped such that the central loop is placed within the vagina which is then held within the pelvic canal by the two side arms tightly tied to the fleece of the flanks. These cases work best in mild early cases.
·         Complications associated with the vaginal prolapse include: abortion, incomplete cervical dilation, death of lambs causing death of ewes. Many abortions occur 24-48 hours after the prolapse has been replaced; whether this is due to trauma of the placenta or womb is unknown- but care must be taken to handle the matter smoothly with the least amount of stress.

Uterine Prolapse
This kind of prolapse is much rarer. (0.1% of ewes at risk)
·         May occur either immediately after lambing or after an interval of 12 – 48 hours. In the first instance prolapse usually results as a consequence of prolonged second stage labour culminating with the delivery of a large singleton lamb. Occurring after an interval is usually the result of straining caused by pain arising from infection and swelling of the posterior reproductive tract, which have developed from assisted delivery of lambs.
·         Clinical Presentation: the everted uterus is hard to miss. It is a large (to the level of the hocks) hanging mass from the vulva, with prominent caruncles (“buttons”) and adherent foetal membranes.


·         Treatment: it is imperative that the uterus is replaced correctly and full inverted to its normal position within the abdomen. The ewe will continue to strain, causing considerable distress, and suffering and re-prolapse if it is not replaced correctly. The best option is for a vet to replace the uterus, under extradural analgesia. The standard method is as follows: Infiltration of the vulva with 2% lignocaine solution affords some degree of analgesia in order to insert retention sutures but this technique is much inferior to caudal block. A Buhner suture of 5mm umbilical tape affords the best means of uterus retention. Antibiotics, either procaine penicillin or Oxytetracycline should be administered intramuscularly daily for 3 – 5 days after, in order to limit the bacterial infection of the traumatised tissues. NSAIDs to reduce pain should be given in correspondence to the ewe’s condition. Ewe milk yield will be reduced for a number of days after, lambs must be fed supplement. Unlike vaginal prolapse, uterine prolapse does not often occur in following years so culling is not usually necessary. 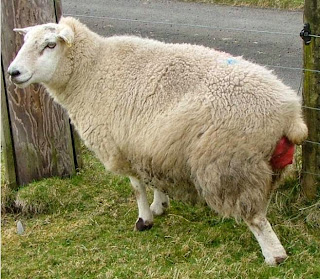 Author: Luke Rose at 11:46
Email ThisBlogThis!Share to TwitterShare to Facebook