Blog is constantly being updated to cover all topics... please be patient
Home » antibiotics » cattle » dry cow » lactation » mastitis » milking » When, What and Why is a 'Dry Period' in Cattle

When, What and Why is a 'Dry Period' in Cattle

All lactating dairy cows will undergo a ‘dry period’ every year, around 2 months before their calving date. During this period the cows are not milked; this allows the cow’s udder to regenerate its tissues and be restored back to its healthiest state, as well as getting rid of any mastitis that may have been acquired while lactating. As dry cows are not producing milk 24/7, they do not use as much energy and nutrients for milk production, which means they have more of these assets to divert towards the impending pregnancy and calving, which takes up huge amounts of both energy and nutrients. A deficiency in either of these can be catastrophic for both the calf and dam.

When are they dried off?

Lactating cows are dried off around 2 months / 60 days before their calving date. This means that they lactate for around 305 days per year, depending on how quickly they become pregnant.
If a cow becomes pregnant in January, she will be dried off (i.e. not milked anymore) in July and will calve in September. From the period between Jan and July she is lactating and so will be milked, between July and Sept she is not being milked. After she has calved in September she will start her lactation again, which will last for another 305 days; during this time she will become pregnant again, usually around 2-3 months after her previous calf. 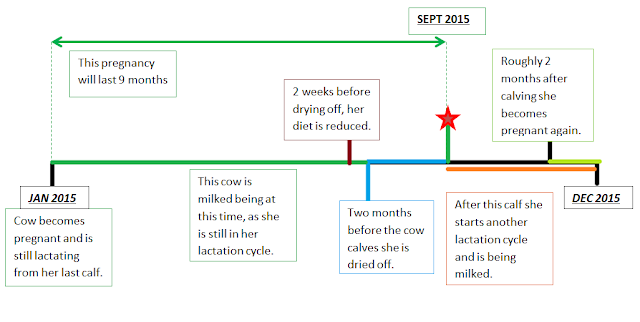 What is dry cow therapy and why is it important?

Dry cow therapy has traditionally been the use of intramammary antibiotic therapy immediately after the last milking of lactation.
The use of intramammary antibiotics at drying off can decrease the number of existing intramammary infections (i.e. mastitis) and prevent new infections during the early weeks of the dry period.
The use of dry cow treatment is one component of an effective mastitis control program; however should not be the only component of the prevention against mastitis.
Essentially what happens is, at a point of 60 days before calving, the cow is milked for the last time in that lactation and antibiotics are infused with the udder. Each teat is given a tube of antibiotic which is known as an intramammary long acting antibiotic. This means that at the end of this process, all 4 quarters of the udder will be protected for the forthcoming 60 days. This process must be kept as hygienic and sterile as possible in order to minimise the chance of bacterial invasion of the teat. There are several additional management options which are used optionally depending on the stockman’s choice. These are outlined further on in this document.

The dry period is a much more effective time to treat existing mastitis infections, rather than during lactation. This is mainly due to the following reasons:
·         The cure rate is higher than during lactation, particularly for S. aureus.
·         A much higher dose of antibiotic can be used safely, meaning that the pathogens are more likely to be killed.
·         The retention time of the antibiotic is longer, so giving protection for longer and ensuring that all pathogens are killed.
·         Tissues damaged by mastitis can be regenerated before freshening.
·         There is a reduced risk of contaminating milk with drug residues.

The risk of new intramammary infection is greatest during
the early and latter portions of the dry period. Most dry cow treatments provide sufficient protection after drying off so that:

A) The frequency of new infections during the dry period is reduced.

B) The incidence of clinical mastitis at freshening may be reduced.

There are very few products which provide activity for the whole dry period. Most have maximum activity in the first few weeks and activity declines as the dry period length increases. If they do have extended activity, the milk residues need to be kept in mind if a cow is due to calve early, as this may mean that milk is being given within the withdrawal period of that drug.

Only approved commercial antibiotic products specifically for dry cow therapy in single dose containers for intramammary infusion should be used. These products contain high levels of one or more antibiotics in a slow release base which will maintain therapeutic levels in the dry udder for a significant length of time. The aim of these products is to kill bacteria in the udder, whether the bacteria are already colonised on administration, or are invading due to new infection.
These antibiotics, and their administrative utensils, have been prepared aseptically (so they are sterile), it is important that the stockman takes all measures to provide the highest grade of aseptic technique possible. This will minimise the chance of bacteria invading the teat.
Most dry cow therapy products are designed to eliminate existing infections by Gram-positive bacteria, particularly S. aureus and the streptococcal infections at drying off and to prevent new infections in the early dry period.
Many producers have already eliminated Streptococcus agalactiae and dramatically reduced levels of S. aureus in their herds. In herds where confinement and stocking is high, a higher percentage of new infections during the dry period are caused by environmental bacteria.
Most dry cow therapy products are reasonably effective against environmental streptococci, especially S. uberis, but lack efficacy against Gram-negative environmental bacteria, especially coliforms (e.g. E. coli).

Sealing off the teat canal by the natural keratin plug that forms during the dry period is the primary natural component protecting against new intramammary infection in the late dry period. Potential damage to that protection is one of the reasons why repeated infusions are not recommended.
It has been documented that a significant proportion of quarters experience long delays or outright failure to form a complete keratin plug during the dry period, putting these quarters at increased risk for experiencing new mastitis infections. One study has reported that this risk is increased in cows producing high levels of milk at drying off.
One method of supplementing the teat’s defences throughout the entire dry period is by use of an internal teat sealant. An artificial internal sealant is available for use alone or in combination with an antibiotic infusion. This product has no antimicrobial activity, it simply acts as a physical barrier to bacteria, and is therefore if used alone it is recommended for use only in the uninfected udder.
As with other products, it is important that great care is taken over hygiene when administering the sealant.

Another method to supplement the cow’s natural defences is to apply an external sealant to teats by dipping. These products are adjuncts to antimicrobial infusion and should be used alongside, not instead of. As long as the teat end remains covered, protection from bacteria entering the gland is provided. Thus, for continuous protection, they require visual inspection and reapplication every 5-7 days throughout the dry period.

What is the infusion procedure?

Generally, on all farms and husbandry systems, there is a set of guidelines that are routinely followed by stockmen when drying off cows…
1.       Milk the cow as normal until she is finished.
2.       Clean and dry the teats.
3.       Dip the teats in an effective germicide product (i.e. iodine solution) and allow 30 seconds contact time before wiping off with an individual disposable towel.
4.       Clean each teat end using a cotton swab soaked in surgical spirit/70% alcohol solution. Using a separate cotton swab for each teat.
5.       Insert the tip of the cannula (nozzle) of the antibiotic tube into the teat and express all of the tube contents. Repeat this with the other 3 teats with separate tubes.
6.       Dip teats in germicide again after infusion.
7.       Isolate the cow from the main herd and do not milk for the next 60 days (until the cow calves).
8.       It is ideal to have a group of dry cows acting as a herd in one field, this makes inspection easier.

What aspects are to be taken into consideration?

Feeding:
Concentrate feeding of high producing cows should be stopped 2 weeks before the anticipated drying off in order to reduce daily yield.
Nutritional management should also be considered. Negative energy balances and trace element deficiencies during this period can result in impaired immune function.

Repeat infusions:
Research to date indicates there is little, if any, value in treating cows at drying off with multiple infusions, where multiple infusions refers to treating twice at drying off, or at dry off and at some later time.
Subsequent infusions may pose the additional risk of forcing bacteria into the gland as well as the increase risk of antibiotics in milk after freshening (the first milkings after the calf has been delivered).

Preventing drug residues:
Attention must be given to make sure that the drugs for the dry therapy do not remain in the milk or meat (which will be consumed by humans) when that cow is prepared for human consumption.
The period after administration at which the levels of the drug in the body or milk are unacceptably high is known as the withdrawal period. After this period, the animal is then safe to consume or consume from. If a cow calves early, this may be within the withdrawal period of the intramammary antibiotics used, especially if this cow has been given a repeated dose and so this cow’s milk should not be used for human consumption until it exceeds the dry period.

Sanitation / Dry cow management:
Because udders are not milked during the dry period, pathogens are not flushed out of the lower portion of the teat canal. This may lead to new intramammary infections especially by skin colonizing staphylococci. The number of new infections is related to the bacterial population on teat ends. Therefore, exercise lots, loafing areas, stalls and maternity pens should be clean, dry and free from unhygienic conditions. Animals on pasture should not be allowed in ponds or excessively muddy areas.
Dry cow treatment may be helpful in preventing new infections during the early dry period. However, the udder is vulnerable to new infections during the last 2 or 3 weeks of the dry period when the intramammary antibiotics are least effective.

Summer mastitis:
The dry period, as well as being a chance to rid of infections, is also an opportunity for summer mastitis to set in. This type of mastitis is caused by sheep headfly and is most commonly seen in the summer months, affecting dry dairy cows. It can be extremely damaging to udder health and a significant cause of economic loss.