The somatic cell count (SCC) is a main indicator of milk quality. The majority of somatic cells are leukocytes (white blood cells) – which become present in increasing numbers in milk usually as an immune response to a mastitis-causing pathogen – and a small number of epithelial cells (milk producing cells) which are shed from the inside of the udder as a result of infection.
SCC is quantified as the number of cells per ml of milk. In general terms:
·
An individual cow SCC of 100,000 or less indicates an uninfected cow, where there are no significant production losses due to subclinical mastitis.

Cows with an SCC of greater than 200,000 are highly likely to be infected in at least one quarter.
·         Cows infected with significant pathogens have an SCC of 300,000 or greater.
The SCC in milk increases after calving when colostrum is produced before the cow settles into lactation and tends to rise towards the end of lactation, most likely due to lower volumes of milk being produced and so a concentrating effect may come into play. SCCs vary due to many factors, including seasonal and management effects.
Dairy farmers are financially rewarded for having low SCCs and penalised for high ones.

Milk with a value of 400,000 or above is deemed to be unfit for human consumption.

A particularly low SCC is sometimes regarded as a sign of poor immune response, but in general terms this need not be necessarily true; it may be the case that there is simply a low level of current infection. Immune response is best measured by how quickly the immune system reacts to the disease challenge, not how many white blood cells are present before infection occurs.
Cell counts tend to reflect a response to contagious mastitis pathogens: the Bactoscan count, on the other hand, indicates the level of bacterial contamination from external sources, such as insufficient cleaning of the milking equipment or poor udder and teat preparation prior to milking, and can indicate a high level of environmental pathogens. 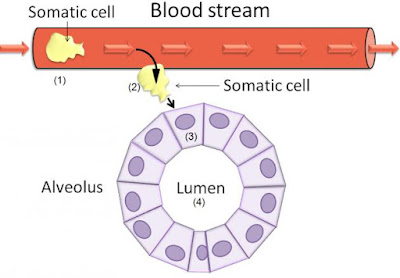