On many dairy farms the move away from seasonal calving, combined with increased milk production, has meant that producing one calf per year is no longer as critical as it once was. Nevertheless, regular calving at predictable intervals is essential on all farms.

Poor fertility results in lower productivity, increased culling, inferior herd genetics and reduced profitability. Whatever the farm system, reproductive management needs to be efficient so that cows become pregnant soon after they are eligible for service using only a limited number of inseminations.

From Day 1…
Good reproductive management does not just involve the milking cow; it starts from the day a heifer calf (female young cow) is born. Good quality heifer rearing is essential to get heifers cycling (into a regular hormone cycle) at 13 months of age, in order to be pregnant at 15 months of age and calving at 24 months of age. It will also greatly improve her fertility once she enters the calving – mating – pregnancy cycle. 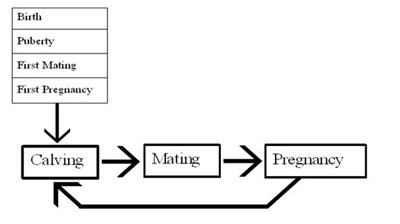 Cattle are aseasonally polyoestrus; i.e. they come into heat throughout the year at regular time intervals.

The term ‘on heat’ refers to a cow at a specific point in her oestrus cycle, at which the cow is most sexually active; the correct scientific name for being on heat is ‘undergoing oestrus’ however is also sometimes referred to as ‘bulling’. Each cow has an individual oestrus cycle which lasts for 21 days before cycling back to the start. So a cow is always in her oestrous cycle but only undergoes oestrus once per cycle.

The two main hormones involved in this cycle are progesterone and oestrogen.
·         Progesterone is the hormone of pregnancy and is produced in the ovary by a structure known as the Corps Luteum (CL).
·         Oestrogen is the main hormone responsible for oestrus (heat) behaviour; it is produced in the ovary by the follicle (from which the egg comes).

Cows undergo oestrus/are on heat when their progesterone levels fall and their oestrogen levels rise. On average, cows come into heat every 21 days/3 weeks (ranging from 18-24 days). However, heifers (virgin young female cows) tend to have shorter intervals of heat, but only by a day or so.

Cattle with heat intervals outside the 18-24 day range are likely to be abnormal and this can sometimes be a reason to suspect disease.
Heat usually lasts for around 18 hours but this period can be variable depending on the cow’s normal oestrus habits.

With two exceptions, as long as a cow remains non-pregnant, it carries on cycling between progesterone and oestrogen until it is inseminated at the right time (i.e. semen reaches the egg between oestrus and ovulation) and becomes pregnant. The two exceptions are before puberty and after calving. 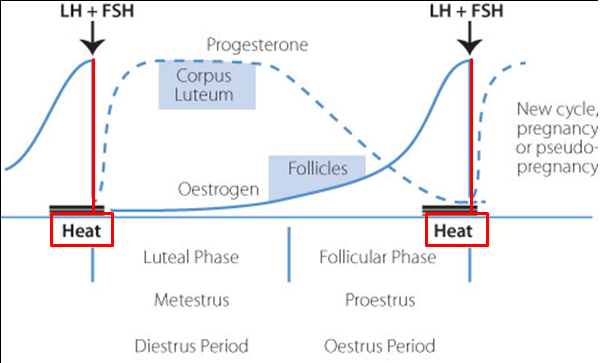 The normal cycle of hormones that makes up the oestrous cycle begins in heifers when they reach puberty. The age at which heifers reach puberty depends on their liveweight; lighter heifers start the cycle later than heaver animals. In order to maximise heifer fertility, the weight gain of the animal leading up to this point must be consistent and well managed.

So that heifers get pregnant at 15 months of age (so they calve at 24 months old), they need to be start cycling (going through the hormonal cycle – the oestrous cycle) by 12-13 months of age.
The reason that they need to cycle before the time at which they will actually conceive is that heifers that have cycled 2 or 3 times prior to mating are far more fertile than those that are cycling for the first time. Therefore, to ensure that all heifers are cycling by 12 – 13 months of age (leaving them adequate time to go through 2/3 oestrus cycles, taking 6-9 weeks, making them ready for mating at 15 months old) heifers need to weigh 50% of their expected adult bodyweight at 12 months and gain 10% of their expected adult bodyweight in the next 3 months.

NOTE: Indeed a large section has been skipped here, the actual birthing of the calf – as this is only a basic introduction of reproduction and the parturition topic is so large, I have covered this in full detail in a specific post which can be found here *insert link here*

The main impact of this failure is that cows are not served until their voluntary waiting period is over (this is the planned time interval between calving and next mating), meaning they are ‘late’ on their reproduction schedule. Just like heifers cycling before mating, adult cows also benefit from cycling before being put to a bull for servicing; it increases their chance of fertilisation.

Many factors, such as disease around calving and trace element deficiencies affect the return of normal cycling, but, as with puberty in heifers, one of the critical factors affecting return to cyclicity is bodyweight, particularly loss of bodyweight.